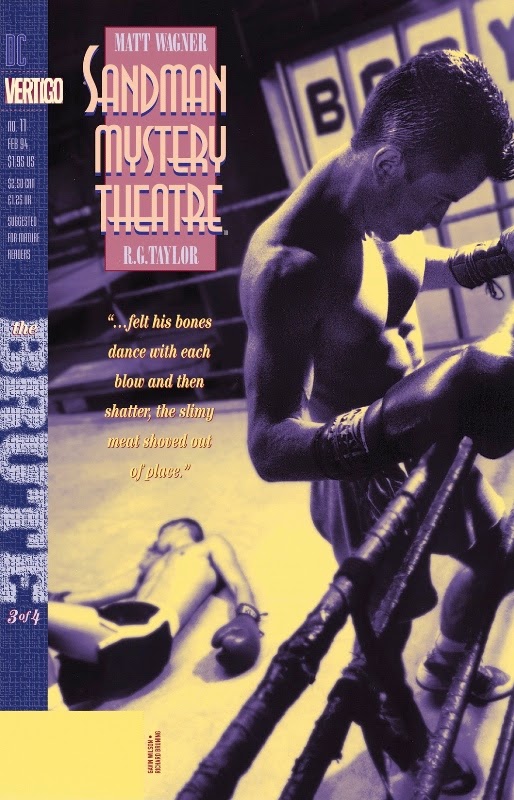 The third act of "The Brute" begins with Dian Belmont following Wesley Dodds' advice to meet with Judge Thomas Schaffer in order to learn more about children's charities.

For all of Dian's progressive thinking and open-mindedness toward other cultures and people, she comes off sounding naive regarding child abuse and neglect.  Then again, she's a young socialite and all of her friends are young, rich, and childless, so perhaps this is a part of society's dark half of which Dian truly has no knowledge.

And in that bleak, harsh realm of society where children starve we find former prize fighter Eddie Ramsey returning to the junkyard shack where he and his daughter have holed up with an old tramp named Mr. Schenck.  Ramsey's daughter is sick with a persistent bronchial condition and needs expensive medicine to treat it.  Ramsey encourages her to finish the medicine, telling her he got a new job and will be able to afford more. 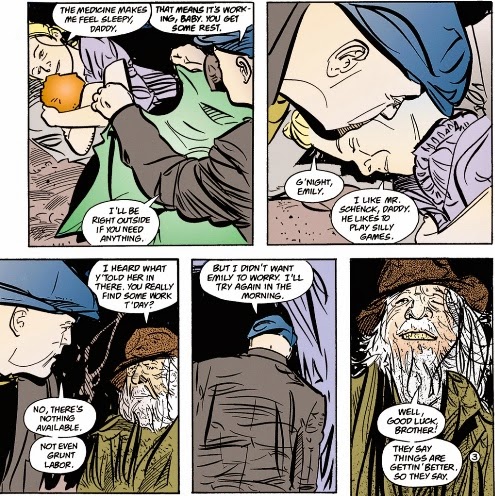 Ramsey admits to Schenck that he lied about getting a job; he's in a pretty desperate situation now, unable to afford food and medicine while also hiding out from mob goons who want to kill him.

Is it classist or prejudicial of me that hearing little Emily say the old, dirty man plays "silly games" with her while Ramsey's away?  That line set off my weird/creepy sensor.

In a much more affluent part of the city, Wesley Dodds goes to the office of Arthur Riesling who has asked Dodds to invest in a research expedition to Antarctica.  Wesley suspects Riesling of illegal activities, including--among other things--underground fights.  He thanks Riesling for giving his friend Judge Schaffer tickets to a boxing match a few days earlier, and tries to entice Riesling into revealing his connection with less lawful sport. 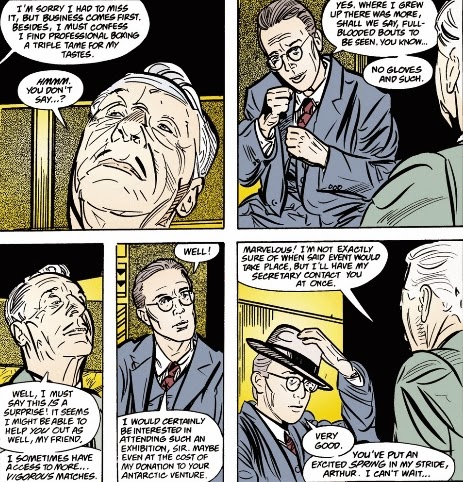 As Wesley leaves Riesling's office, the older man is visited by his son, Dennis.  The younger Riesling says they have a problem with "Maria" that is getting harder to control.  The last time we saw Dennis Riesling, he was summoning the giant, ugly "Brute" into a car with a whistle.  Is this hulking brute-thing Maria?  And from the sounds of Dennis' cryptic dialogue, the brute might be Arthur Riesling's daughter, or his responsibility in some other fashion.  Riesling is outraged that his son brought this business to his office.  He slaps his son and tells him to leave.  All of this is witnessed by Wesley lurking outside the office.

Across town, Eddie Ramsey has found work as a laborer unloading freight.  But when he goes to collect his pay, he's dismayed to only receive $1.20 for ten hours of hard physical work.  The paymaster is unsympathetic and tells him to take it or find another job.

Arthur Riesling drives to Harlem to meet with a known gangster named Francesco Gamboni.  They make some racist comments and then get to business.  It seems that Riesling approached the Gamboni family about buying a large shipment of heroin, but he's having trouble raising the money to pay for it at the moment.  That's why Riesling wanted to get money from Wesley.  Riesling assures the gangster that he will have the money raised within the week.

Neither of them realize that the Sandman is spying on this meeting, using a listening device dangling down the building's chimney.

Desperate for money, Ramsey goes back to his old gym to ask his trainer, Mel, if he can get him back in the ring.  Mel is disgusted and wants nothing to do with Ramsey.  Someone has been spreading the word to all the local gyms that Ramsey worked for the mob selling drugs to blacks in Harlem.  No trainer or fight organizer will every work with Ramsey now.

Devastated, he starts to leave when he overhears Arthur Riesling talking to another fighter.  Riesling invites the fighter to one of his underground, bare-knuckle fights.  After that, Ramsey returns to the shack to see Emily and Mr. Schenck.  He spent the money he earned working on food and the three of them eat heartily.

Francesco Gamboni tells his father about the deal he made with Riesling, and then catches a taxi to take him out of Harlem.  This taxi driver, however, wears a gas mask. 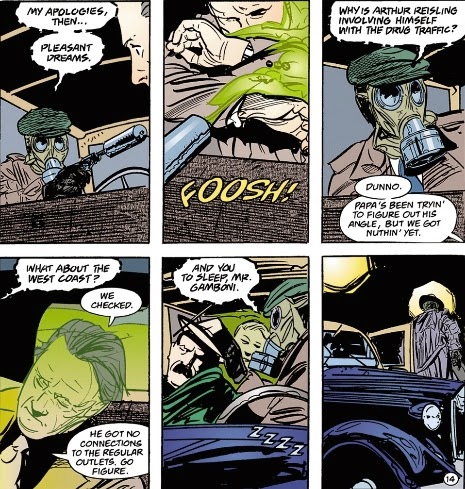 Dian Belmont invites Wesley Dodds to her home and tells him that she's taken up work for The United Way collecting donations for their charity.  Without hesitation, Wesley writes her a check for three-hundred dollars and encourages her to reach out to her wealthy friends for more donations.  After Wesley leaves, Dian calls the richest man she knows, Arthur Riesling, who she met a few days earlier at his St. Patricks's Day party.

Riesling says he'll be happy to donate if she comes over to his house next week.  Assuming the Sandman hasn't stopped him before then, that could be bad for Dian.

A few nights later, Wesley Dodds goes to Riesling's house to attend a bare-knuckle fight.  Ramsey goes there as well, although he isn't invited to sit ringside with the other rich guests.  Ramsey skulks around outside and spies on the scene from inside. 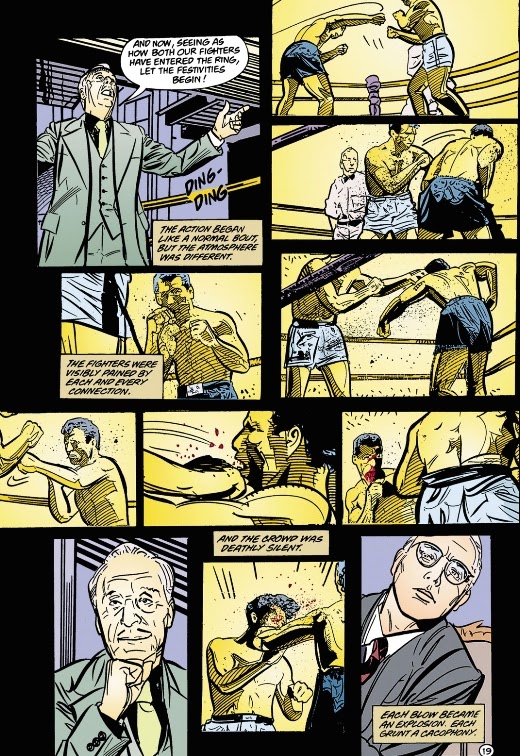 After a round or two, the fight steps up a level as the fighters put on gloves covered in spikes and blades.  Wesley pulls a Clark Kent and makes an excuse about indigestion to leave the room.

Outside, Ramsey is ambushed by Riesling's goons working security at the house.  One of them blows the whistle that summons the Brute. 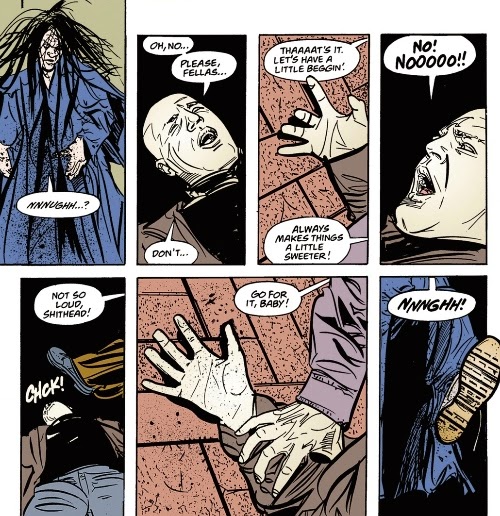 The giant steps on Ramsey's hand.  Again and again.  Crushing every bone in his hand and fingers.

Wesley steps outside to get some fresh air.  He hears the goons jokingly talking about Ramsey running away "like a bat with only one wing".  He also recognizes the Brute as they push lead it away.

In agonizing pain with his hand completely wrapped up, Ramsey stumbles back to the shack to see his daughter.  What he sees when he arrives, though, nearly stops his heart.  Emily has blood at the bottom of her dress.  His first thought is she has gotten her first period, but he thinks she's too young for that.

Then it gets worse. 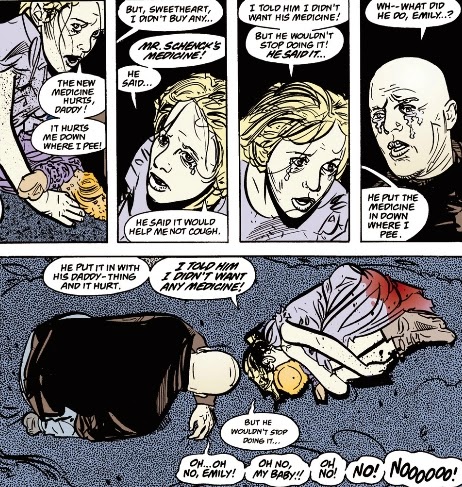 Matt Wagner brought sex and violence into this series in the very first issue, but this is the most brutal issue so far.  Seeing Ramsey's hand crushed would have been harsh enough to close out this chapter, but he ratchets it up even further by having a little girl raped by the man who offered her and her father shelter.

Dian Belmont's quest to help abused children seems quaint, almost insulting from her place of privileged distance when put in the context of the violence done to a child in this story.  Likewise, the case that the Sandman is pursuing seems almost trivial in comparison.  Who cares if Riesling is entangled in a drug deal with the mob or if he's hosting illegal boxing matches?  Who cares about the so-called Brute, even after she crushes Ramsey's hand, which will ensure he can never fight or work as a laborer again.  None of these "villains" seem remotely as evil or menacing as Mr. Schenck now in the light of his assault on Emily.

This issue hits you like a haymaker from a heavyweight fighter.  The last two pages are more savage and troubling than anything since the first story arc, and we still have one more issue before the story concludes.

Come back next week for the Act Four of "The Brute"...

Curtain.
Posted by Count Drunkula at 12:00 AM 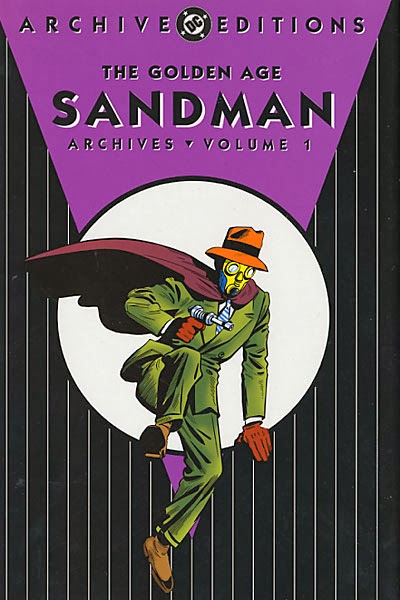 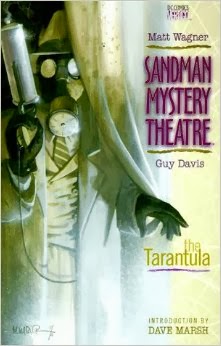